Accidents and Serious Injuries by Vehicle in Georgia

Accidents and Serious Injuries by Vehicle in Georgia DUI Cases

The majority of DUI cases in Georgia are treated as misdemeanors.  However, as with most things in the law, there are exceptions, particularly when DUI results in the serious injury or death of another individual. Under Georgia DUI law, if you cause another person bodily harm while driving under the influence of alcohol or drugs or by driving recklessly you can be charged with the felony offense of Serious Injury by Vehicle.

Georgia Code Section § 40-6-394 defines Serious Injury by Vehicle as “caus[ing] bodily harm to another by depriving him of a member of his body, by rendering a member of his body useless, by seriously disfiguring his body or a member thereof, or by causing organic brain damage which renders the body or any member thereof useless through the violation of O.C.G.A. § 4-6-390 [Reckless Driving] or O.C.G.A. § 40-6-391 [DUI].”

The Serious Injury by Vehicle statute does not define what constitutes a “serious injury.”  Other statutes define it as a “fractured bone, severe burns, disfigurement, dismemberment, partial or total loss of sight or hearing, or loss of consciousness.”  To be “serious,” the injury need not be permanent – a serious, temporary injury is sufficient and only needs to impair or injure the appearance of a person.  In the past, injuries such as loss of vision in one eye, blurry vision, a two-inch scar on the forehead, broken ribs, and severe bruising have qualified as “serious.”  Whether an injury is serious is a question of fact to be determined by the jury.

This law does not require that any malicious intent to harm be proven.  As a result, defenses such as where a person did not intend to get in an accident or drive recklessly are not allowed.

If someone is serious injured due to an alleged DUI driver, the driver will be charged with a felony that result in up to 15 years in prison.  Even the injured party is your own passenger or family member, you can be charged with a felony that can result in 15 years in jail.  So, please take this charge with the utmost seriousness. Our attorneys are trained by the same people who are people who are prosecuting your case.  Put our experience to work for you.

The Elements of the Offense of Serious Injury by Vehicle in Georgia:

This situation arose in the case of Hannah v. State, 280 Ga. App. 230 (2006).  In that case, the trial court convicted Hannah of both DUI and Serious Injury by Vehicle.  The Georgia Court of Appeals overturned the DUI conviction, holding that “a single instance of defendant's DUI was ‘used up' in proving that he caused a serious injury by vehicle, and, thus, that instance could not be used again for a separate DUI conviction.”

It is important to note that a person can also be charged with multiple counts of Serious Injury by Vehicle if multiple individuals were seriously injured in the accident.  These charges will not merge, even though the conduct that caused the injuries was a single instance of DUI or Reckless Driving.  This also holds true with vehicular homicide.  Thus, if one person was seriously injured in an accident and another died, the Defendant will likely face charges for both Serious Injury by Vehicle and First Degree Vehicular Homicide.  This was the case in Harris v. State, 272 Ga. App. 266 (2005).  In that case, the Defendant was charged with five counts of Serious Injury by Vehicle and one count of Vehicular Homicide, which all stemmed from a single incident of driving under the influence.  The Court held that this was proper, because there were a total of six distinct victims in the case.

You are fighting an uphill battle, but you do not have to fight it alone:

The law leans heavily in the State's favor in a Serious Injury by Vehicle case.  In a typical DUI case where no injury has occurred, Georgia law makes clear that an arrest for DUI must be effectuated prior to a request for a state-administered chemical test.  However, when an accident results in serious injuries or fatalities, Georgia's Implied Consent law states that the any person involved in such an accident must submit to a blood test with a drug screen even if there has not already been an arrest for DUI.

This does not mean, however that being involved in serious traffic accident requires you to relinquish all of your rights.  The officer requesting a chemical test must still have probable cause to believe that an individual was driving under the influence of alcohol when the accident occurred and that the serious injury that occurred resulted from the accident.  Implied Consent must still be read; if this does not occur, the results of the state-administered chemical test will not be admissible as evidence at trial.

Thus, you do have rights, and if those rights were violated, you have defenses.  The State's prosecutors will bring together the resources of the entire state in order to defeat those defenses.  You start the case out-numbered and out-gunned.  To level the playing field, we work closely with a team of the best investigators, field sobriety experts, and expert medical witnesses across the country.  In cases involving serious accidents, we also can talk about employing an accident reconstructionist and other specialists who can help challenge the State's case against you.  Winning your Georgia DUI case does not happen without a team of dedicated professionals devoted to your Georgia DUI Defense.  Our Atlanta DUI Attorneys are both skilled and compassionate.

There is Hope - There are Defenses - Our Experience is the Difference:

Because DUI is so often the underlying reason for a Serious Injury by Vehicle charge, it is crucial to have an attorney who is an expert in handling DUI cases.  Georgia DUI Lawyer Richard Lawson has over 25 years of experience handling DUI cases involving accidents.  In fact, he started his career prosecuting those cases more than 25 years ago, and handled many Serious Injury by Vehicle cases during his tenure as a prosecutor. Hire an attorney who will not only formulate a good defense, but who also understands the tactics the State will use in the prosecution of your case.

As a Georgia DUI Defense Attorney he has successfully defended several Serious Injury by Vehicle by Vehicle cases throughout Georgia.

A DUI is complicated.  In addition to the criminal case, an individual charged with DUI is also facing a possible administrative license suspension, which has its own separate and distinct set of procedures and rules.  On top of the law being complicated, it is also constantly evolving.  Case law from higher courts is regularly handed down, and lawyers must remain current in order to be able to use favorable precedent to their clients' advantage, or distinguish their clients' cases from unfavorable precedent.

In addition to knowing the law, a Georgia DUI Attorney must be familiar with the science behind field sobriety testing, state-administered chemical testing, accident reconstruction, and toxicology.  Just like the law, technology and science is continually advancing, and your attorney must be aware of these changes.

Keeping up-to-date on the latest developments in DUI law is a full-time job; this is why you need a full-time DUI attorney.  A general practitioner simply cannot keep up.

Georgia DUI Attorney Richard Lawson exclusively handles DUI cases.  His office is committed to providing you with the best DUI defense in Georgia.

How is Serious Injury by Vehicle Defined in Georgia?

What amounts to serious injury has been broadly interpreted by Georgia courts.  The following injuries were determined to be serious enough to support the offense of Serious Injury by Vehicle: loss of vision in one eye, blurry vision, a two inch scar on forehead, broken ribs and severe bruising.

In any DUI Serious Injury By Vehicle case, the State must prove that any serious injuries were caused by your act of driving under the influence of alcohol or drugs or through reckless driving.

The penalties of being convicted of DUI Serious Injury by Vehicle are severe. Serious Injury by Vehicle is a felony offense in Georgia and punishable by imprisonment for not less that one year nor more than 15 years.  In addition, the minimum license suspension period is three years with no early reinstatement and you will not be eligible for a limited driving permit.

Resources are the Difference:

The prosecutors will bring together the resources of the entire State of Georgia against you in order to achieve a felony DUI conviction.  You start the case out-numbered and out-gunned.  Hire our team of Georgia DUI Attorneys and expert witnesses in order present your counter-attack and win.  Winning your Georgia DUI case does not happen without a team of dedicated professionals devoted to your Georgia DUI Defense.

Specifically, if serious injuries to yourself or others were a result of DUI, you could face lengthy, life altering sentences. In these cases, it is even more crucial that you contact our Atlanta DUI Lawyers for help. We work closely with the best investigators, field sobriety experts and expert medical witnesses across the country. In cases involving serious accidents, we also can talk about employing an accident reconstructionist and other specialists who can help challenge the State's case against you.

Results that Matter - Winning Your Case:

The Law Offices of Richard S. Lawson is Georgia's DUI lawyer with over 25 years of experience in these types of DUI defenses. Mr. Lawson's career long commitment to DUI law allows his firm to develop and utilize powerful resources to assist clients who face charges of a serious accident or injury in a Georgia DUI case.

Our office can be contacted 24 hours a day, 7 days a week.  Call or email us now. Your freedom is at stake, and your case will not defend itself and will not go away. We are always here to help 365 days a year, 24 hours a day. Your best defense begins here!

InfoGraphic on Serious Injury By Vehicle In Georgia: 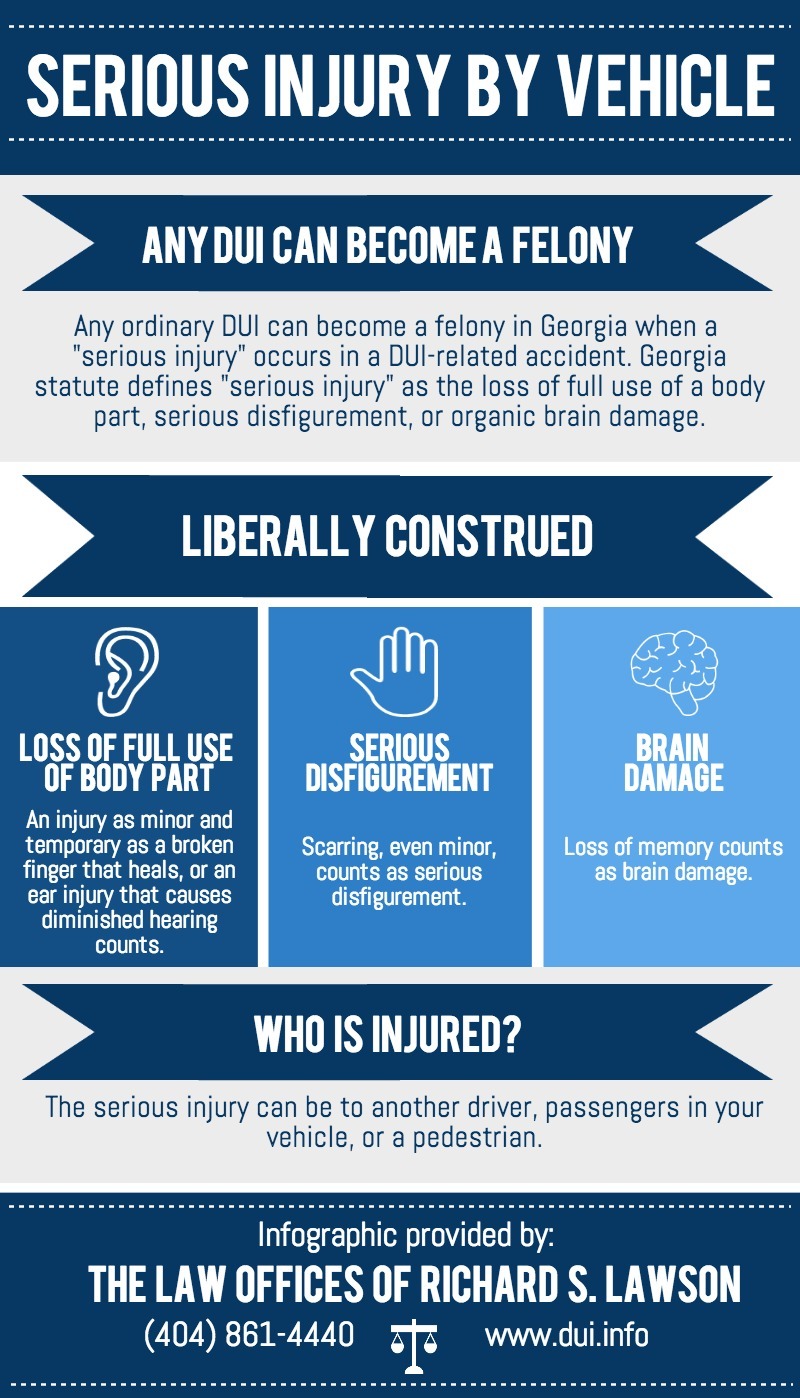