In practically all Georgia GA DUI arrests, the officer administers field sobriety tests. There are three tests that the National Highway Traffic Safety Administration (NHTSA) has standardized. Basically, these tests have been studied and have shown that they correlate with measuring alcohol intoxication and an individual's ability to drive. Our Georgia DUI Lawyers are here every day to protect your rights.

Training and Experience Makes All the Difference: 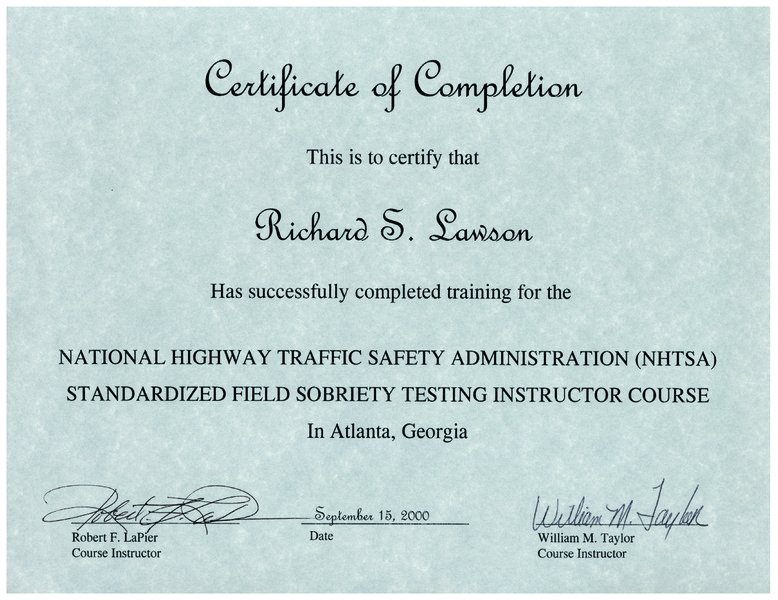 All of the attorney as trained in Standardized Field Sobriety Testing.  Richard Lawson is a former DUI Prosecutor in Georgia with more than 25 years experience.  He was trained by the same people who are prosecuting the case against you.  In addition, in 2000, Richard Lawson became a Standardized Field Sobriety Testing Instructor. As an instructor, Richard Lawson is trained to teach the police officers who arrested your for DUI.  When our office evaluates a case, we can the unique ability to evaluate the administrative procedures used in your actual arrest.  If the arresting office made a mistake, we will find it. This can make all the difference in your case. Every attorney at this office is trained in field sobriety testing and what to look for to see if any mistakes were made in your case. This is why we say that you should never trust your case to a general practitioner.  Hire Georgia's DUI Only lawyers today.

The standardized tests include the “eye test”, also known as the horizontal gaze nystagmus (HGN TEST). In this test the officer conducts a series of measurements where the driver is asked to look at a certain stimulus while the officer attempts to determine the presence of a “nystagmus” (jerking movements) of the eyeball. Every individual is not a good candidate for this test as some people have naturally occurring nystagmus along with certain head and eye conditions which can make the test irrelevant.

The second standardized test is what is known as the walk and turn test. This test consists of nine steps (heel to toe) along a straight line, a 180 degree turn, and nine steps back again. Beginning to walk before you are told to or walking in normal stride instead of making heel to toe steps may cause the Georgia DUI officer to notice “clues” consistent with intoxication. This test is not validated for people who are over-weight or elderly.

The final standardized test used to determine DUI is called the one leg stand. The one leg stand test requires you to stand on only one foot for 30 seconds with your arms by your sides. Like the walk and turn test, this test has never been validated for over-weight people or elderly people, yet the police simply do not care.  They have everyone submit to this testing, even when they know some people have no chance to pass the tests.

These tests are challenging for many people under the best of circumstances, much less nervousness and suspected DUI are contributing factors. There are times when Georgia DUI officers ask drivers to partake in additional non-standardized tests such as saying the alphabet forward or backward or counting to a certain number in their head. Tests such as these have not been validated to prove that they are indicative of a driver under the influence.

Georgia DUI officers generally have a video camera equipped in their patrol car on the dashboard which often records the driver and officer engaged in field sobriety tests. In many cases these tapes may help the defense, for example if a driver does well on the tests and appears to walk and speak normally on the tape but is still arrested for DUI.

Our Georgia DUI lawyer team is skilled in dissecting the methods used by officers conducting field sobriety tests. Often times these tests are completed in a manner opposed to the prescribed methods which makes the results invalid. DUI officers may also be careless in administering the tests then still using the results as grounds to arrest someone for DUI. If this has happened to you, call our Georgia DUI law office today to get a free case evaluation.

Hire the law firm whose attorneys are all trained in the same Standardized Field Sobriety Testing as the arresting police officers.  We will put our expertise and experience on your side.  Contact us today to begin protecting your rights.