A Review Of How DUI Cases Proceed in Atlanta Municipal Court

It's been more than a year since things changed for the better in Atlanta Municipal Court. In the past, when a person hired an Atlanta DUI Lawyer from my office they were warned that their future involved utter chaos.  This description was completely accurate.  We never knew who the prosecutor was going to be on any given day. We could not get copies of the incident reports, nor could we view the videos. Our cases were endlessly reset and little was accomplished.

In January of 2013, Judge Ward took over supervision of all Atlanta DUI Cases. Through his supervision, the cases have been moved in a more orderly manner.  In addition, Atlanta DUI Lawyers have predictability insofar has the court procedure and what is expected of us and our clients.  In effect, the court has been normalized and operates like a real court.  This may sound unusual since a court should operate in a "normal manner."  However, without going into endless detail, it simply did not until Judge Ward took over. This does not mean everyone agrees with every rule or procedure.  At least we now have rules and procedures for the first time in my entire career as an Atlanta DUI Attorney.

When a person is arrested in Atlanta over the weekend (including Thursday evening), they will have court on Monday in front of the Honorable Christopher Ward in Court room 5A. If that person hires a DUI Lawyer in Atlanta their attorney can make the first appearance without their presence. This does not violate your bond and is part of the new procedures implemented by the judge.  When an attorney appears for you, it is as if you have appeared yourself.  Eventually, the accused must appear in court, however having your DUI Attorney in Atlanta appear for you allows you to return to work, school, or your other responsibilities.

If you appear by yourself, you will be asked to hire an attorney within a short period of time.  You then will have to either come back at a later date with counsel or that attorney can make the next appears for you.  The second appearance is called an "inquiry date."  At this court date, the judge will inquire as to the status of the criminal discovery process.  The purpose is to make sure the prosecutor provides the reports and access to the video to defense counsel.  Additionally, the judge wants to know the status of any plea negotiation.

Prior to the inquiry court date, you must have your lawyer file the "30 day letter," to make sure you do not lose your privilege to drive.  If this letter is not filed, you can lose your license for as much as a year.  In cases that involved an alleged refusal to submit to testing, you can lose your license for a year, and there will not be a restricted or limited license in this situation.

This next court date is called a "final plea."  At the final plea, all parties must appear. You cannot be excused.  At the "final plea" the court will expect that the case is ready for the parties to decide their positions.  Prior to this court date plea offers should have been exchanged and discussed and the defense should already know if their case warrants going to trial.

This is the new orderly process in Atlanta Municipal Court.  The key factors here are that the court is no longer chaotic.  It's now an orderly process.  You can be excused for the first appearance if counsel appears for you.  As a result, we work all weekend taking calls from people who need our help.  You are not bothering us. We are here 24 hours a day to help you so you can go back to work or school Monday morning.

The final and most important fact is that you cannot delay hiring an attorney because Judge Ward expects the cases to reach final plea within 60 days of arrest and a final resolution of the case within 6 months. 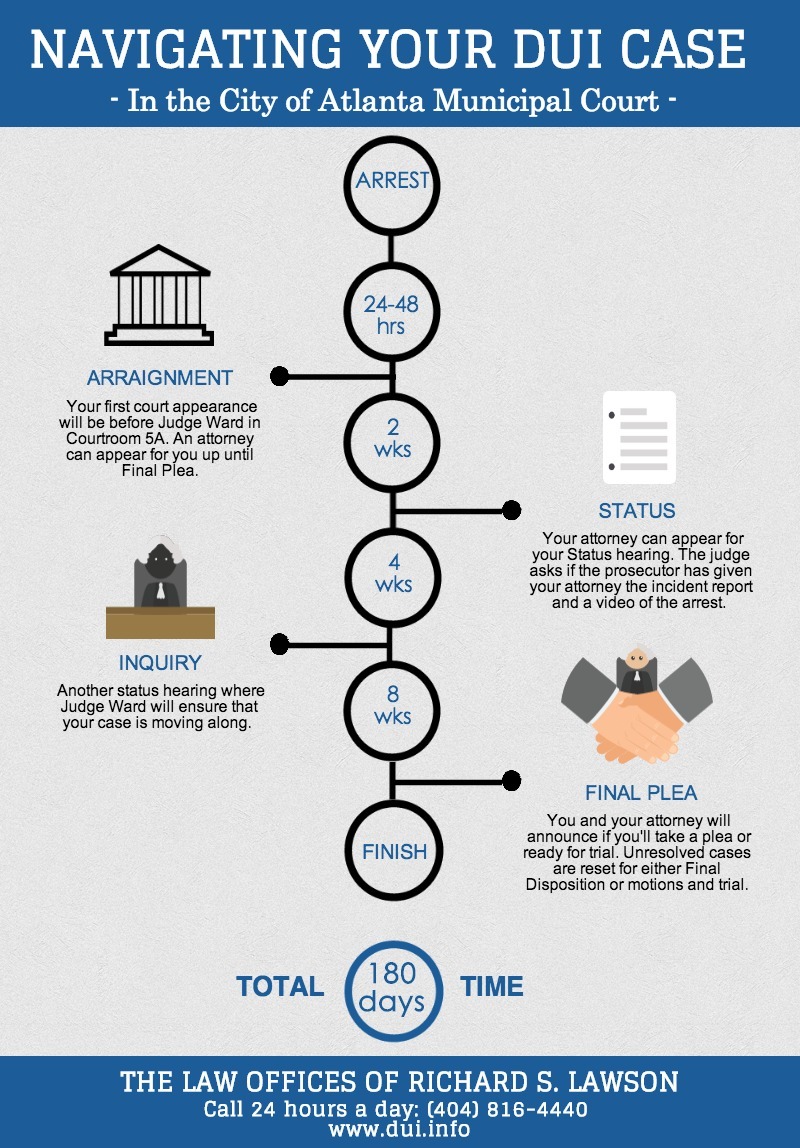