According to the Georgia Department of Highway Safety, traffic accidents are the most common cause of death among police officers killed in the line of duty.  More than a quarter of officers killed are struck by passing vehicles while they work outside their patrol cars. 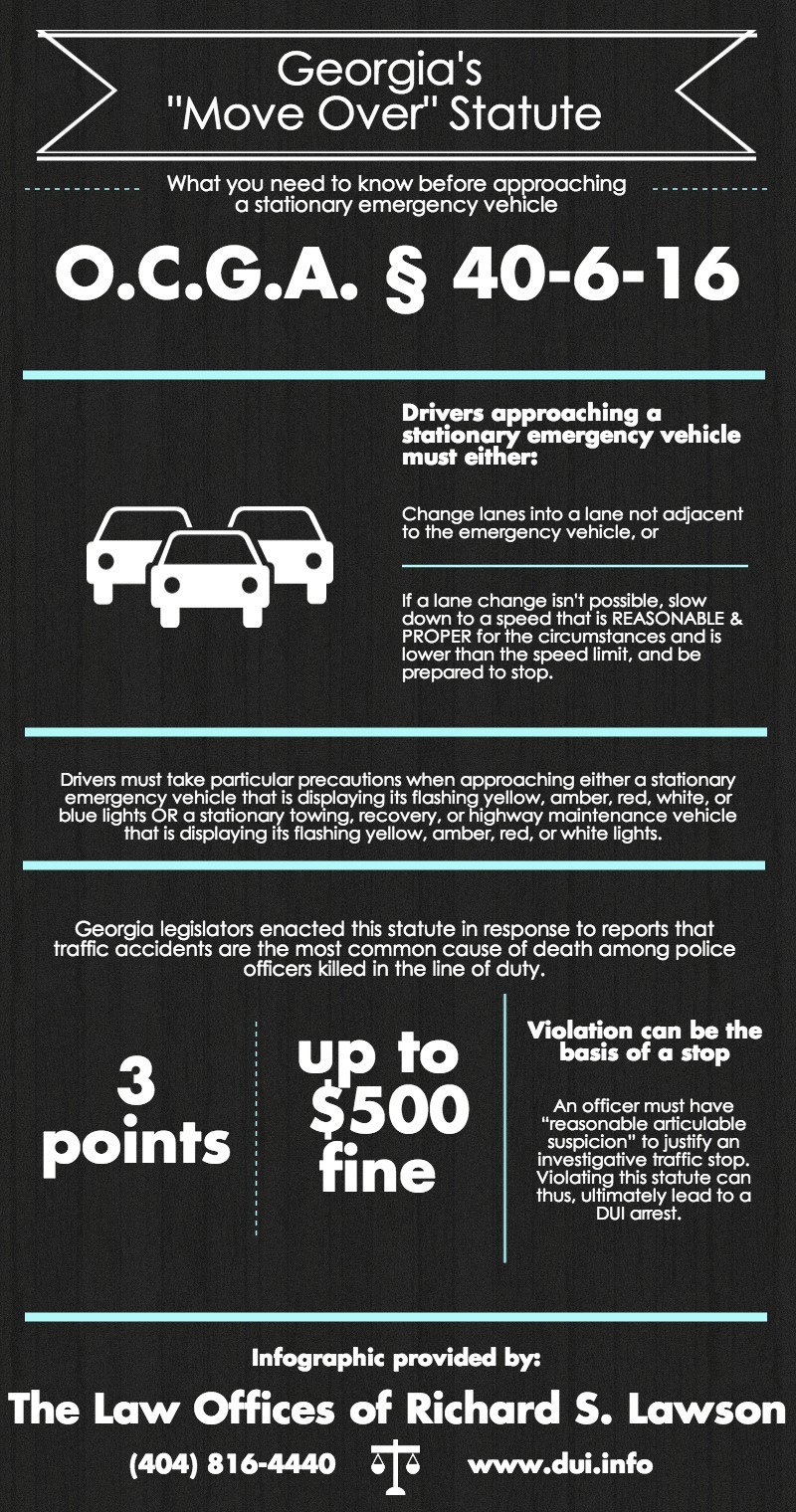 In 2003, the Georgia Legislature enacted O.C.G.A. § 40-6-16, colloquially known as the “Move Over” law, which was designed to prevent such accidents.  This law requires drivers approaching a stationary emergency vehicle to either:

(a)  Change lanes into a lane not adjacent to the emergency vehicle, or

(b)  If a lane change is not possible, slow down to a speed that is reasonable and proper for the existing road and traffic conditions and is lower than the speed limit, and be prepared to stop.

While the law seems to give little guidance as to what speed would be “reasonable and proper” for road conditions.  As a result, members of the legislature that passed the law expressed concerns over the law's vagueness, procedural challenges have, thus far, been unsuccessful.

In the 2013 case of Pierce v. State, the Court of Appeals held that the evidence supported a conviction where the officer had his lights on and the Defendant simply failed to change lanes.  The Court of Appeals also held that the Defendant in that case failed to challenge the constitutionality of the "Move Over" law in a timely fashion, and therefore, that potential defense was waived.

Importantly, the Court of Appeals has also held that a violation of the “Move Over” law can provide the required “reasonable articulable suspicion” to justify an investigative traffic stop, which may ultimately conclude in a DUI arrest.  In State v. Rheinlander, the Defendant failed to change lanes and then approached the officer “so closely that [Defendant] had to swerve to avoid the officer's car.”  The Court held that the ensuing investigation (and eventual DUI arrest) was proper.

Ultimately, the law is difficult to enforce and relies upon "voluntary compliance."  A person most obviously violates the law when an accident occurs.  So don't risk it.  Remain attentive, and if you see lights ahead, make every effort to get over or slow down.

Practical Advice When Approaching an Officer or Emergency Vehicle:

If you have been charged with a Georgia Move Over Law violation, call our office.  We can help.  Most people never intend to violate this law, and if a person's record is clean, we can help avoid a conviction.  Also, many times this violation can lead to a DUI investigation or investigation of other potential crimes.  If charged with DUI in Atlanta or throughout North Georgia, our Atlanta DUI Lawyers can help.  Call an Atlanta DUI Lawyer from our office today.