In DUI cases, most Atlanta DUI Lawyers win or lose the case in pretrial motions.  An effective strategy of filing and arguing motions is the single most important thing your Atlanta DUI Lawyer will do in your defense.  Essentially, the purpose of motions is to ask for the Court for something that will help your case by preventing the State from using illegally or improperly obtained evidence. 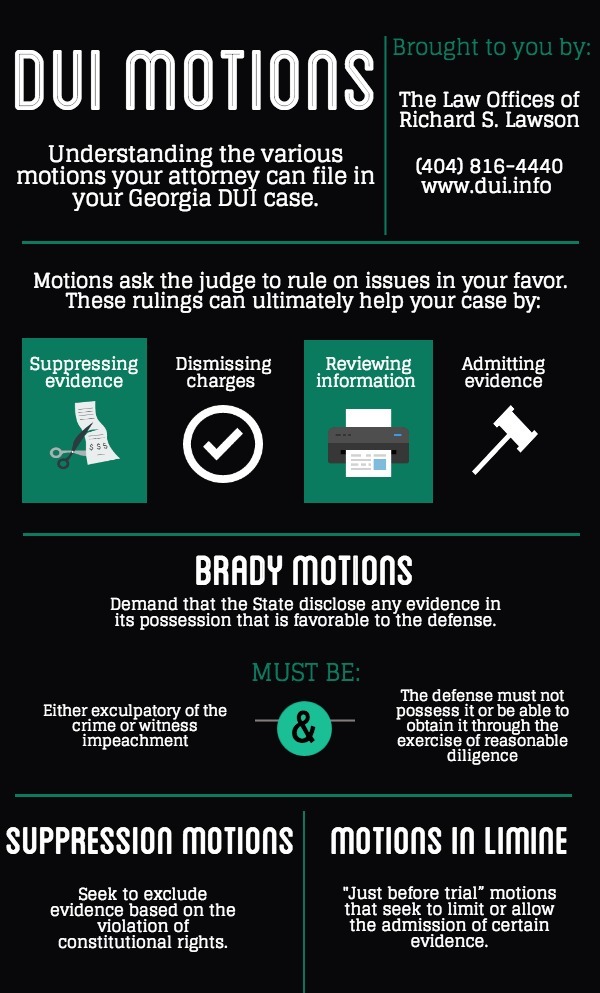 Atlanta DUI Defense Attorneys use Brady motions to require the prosecution to turn over any evidence that could be favorable to the Defendant's case.  The term comes from the 1963 U.S. Supreme Court case, Brady v. Maryland, wherein the United States Supreme Court held that it was a violation of the Due Process rights of the accused when the state withheld exculpatory evidence.  Pursuant to the Brady decision, the prosecution must now disclose evidence that:

For example, if a witness gave the police a description of a suspect, and that description does not match the Defendant, the State must disclose this to the defense, regardless of the evidence of his guilt.   Also, if a witness is testifying against a Defendant in exchange for immunity, this should also be disclosed as both the witness' motivation for testifying and because the accused can call into question his truthfulness may because of obvious motivations.

For example, in a DUI case, Georgia law requires that an arrest must be supported by probable before an officer can request a chemical test of a suspect's breath.  If an arrest is not supported by probable cause, or if the sequence of events is not correct under the law (i.e. arrest before test), this may be grounds for the suppression of a breath test.

Motions to suppress are filed with the court, and frequently require a hearing.  At the hearing, which usually takes place at some time prior to a trial date and always outside of the presence of a jury, witnesses are called to the stand and may be examined and cross-examined, and the attorneys argue for (or against) suppression of the evidence in question.

Motion to Dismiss for Destruction of Evidence:

In a motion to dismiss for Destruction of Evidence, the defense seeks to have the case thrown out because a Defendant's due process rights were violated by the destruction of potentially useful evidence.  The defense must show that the State acted in bad faith.  In other words, the destruction must have been intentionally designed to hide such evidence from the defense.

A motion in limine is a motion just before, or even during, a trial (in limine literally means “at the threshold,” or “at the start”).  Motions in Limine are often used to request that certain testimony be excluded from evidence for reasons that do not necessarily rise to a constitutional level.

For example, in a DUI case, the defense may seek to exclude any evidence of a defendant's admission in a rehab program three years before his DUI arrest.  The defense would most likely argue that this evidence unfairly prejudicial, as it would cause the jury to make certain assumptions that may not be accurate.  In addition, the defense would argue that this evidence is irrelevant as it does not go to show that the Defendant was DUI on the night of his arrest.

Motions in Limine, like motions to suppress, are heard outside the presence of the jury and are decided by the judge alone.

If the Atlanta Police Department or Georgia State Patrol Nighthawks have charged you with DUI, act now.  Your Atlanta DUI Attorney only has 10 days to file an appeal to save your license.  You will also have court Monday morning in Atlanta Municipal Court.  Our Atlanta DUI Attorneys can make that appearance for you so you can return to work, school, or your other responsibilities.