Under 21 Drivers in Georgia Must Use Extra Care

If you are a young driver on Georgia's roadways, you must drive with extra care.  Of course, you are subject to the same rules as all Georgia drivers are; however, you face much more severe consequences for violations of these rules.  It is not difficult to end up with a suspended license if you are under 21, even if you've committed what seems to be a minor offense.  For more serious offenses, like DUI, you are facing longer suspension times with no limited permit benefits. 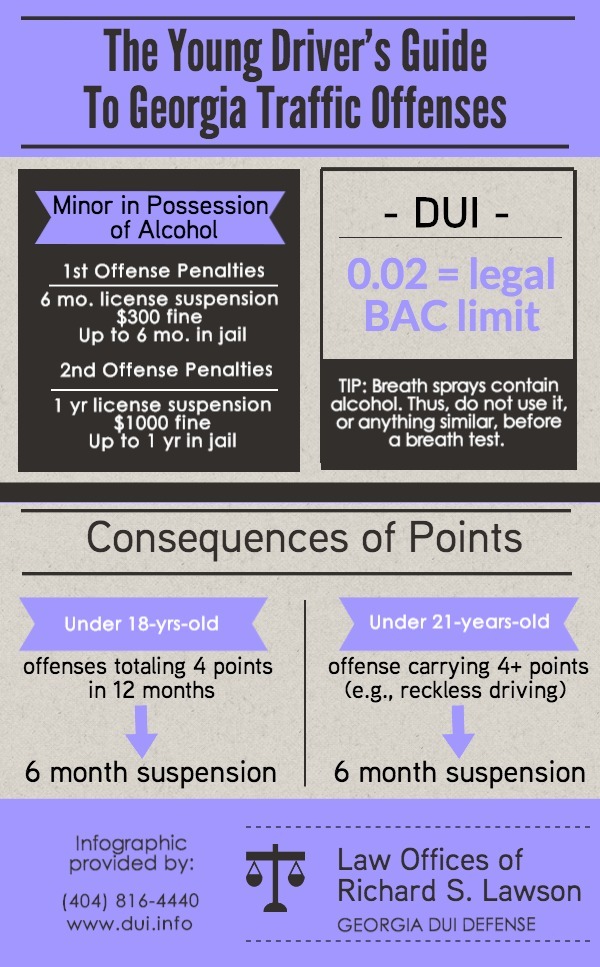 An under-21 driver convicted of hit-and-run, leaving the scene of an accident, racing, fleeing or eluding a police officer, reckless driving, speeding 24+ mph over the speed limit, or any other offense for which four or more points are assessed will have his or her license suspended by the Department of Driver Services for 6-months.

An under-18 driver who accumulates 4 or more points in 12 months will face a 6-month license suspension.  This means that one serious traffic offense (such as reckless driving, hit-and-run, racing, etc.) will suspend an under-18 driver's license, but so will two minor speeding tickets (which carry 2 points each).

A young driver whose license has been suspended for the first time for a non-DUI traffic offense or because of points accumulation is eligible for reinstatement after 6-months.  He or she must pay a reinstatement fee of $210 and complete a defensive driving program.  For a second suspension, the individual must wait 12-months before applying for reinstatement.

An attorney can be extremely helpful in cases like these.  When a young driver is facing a license suspension, the Georgia Traffic Ticket Attorneys in our office are often able to negotiate a reduction in the charges that allows the young driver to keep his or her driving privileges.  That is why it is always a good idea to hire an Atlanta Traffic Ticket Lawyer to help.

Minor in Possession - MIP - Underage Possession or Consumption of Alcohol:

Even offenses that are unrelated to driving can affect a young driver's license.  Certain alcohol related offenses can result in a suspension of a young person's driver's license.  These include using a false ID to obtain alcohol illegally, misrepresenting one's age or identity to obtain alcohol illegally, or attempting to purchase alcohol while under 21 years of age.  A suspension resulting from a conviction to one of these offenses will last for six-months for a first offense and one year for a second offense.

While a more "typical" MIP case – one in which a minor is only caught with alcohol but is not driving or attempting to purchase alcohol illegally – will not result in a license suspension, this does not mean that the consequences for an MIP are insignificant.  All MIP cases are misdemeanors and may be punished by up to six months imprisonment or a fine of up to $300.

Minor in Possession (MIP) While Driving:

An under-21 individual in possession of alcohol (underage possession or consumption of alcohol) while operating a motor vehicle faces a suspension period of at least 120 days.  This is separate and distinct from the DUI law and does not require any evidence of intoxication.  After 120 days, the individual can seek reinstatement but must complete a state-approved Risk Reduction course (DUI school) and pay a restoration fee of $35.

If your child has been charged with a traffic offense, remember the consequences are greater.  Call the Georgia Traffic Ticket Attorneys in our office as soon as possible.