The Benefits Of Reducing Your DUI Charges to Reckless Driving:

Unfortunately, prosecutors rarely dismiss DUI cases.  If total exoneration is the goal, then you will need a jury trial.   The next best thing is a reduction to a charge that carries less stigma and fewer penalties than DUI.  In Georgia, that charge is typically Reckless Driving.  Our attorneys thoroughly investigate every DUI case in order to negotiate a reduction to reckless driving with the prosecutor.

First, while a DUI has a strong negative stigma attached, a reckless driving charge is far easier to explain to employers and school admissions offices.  This is partially true because the meaning of reckless driving is so vague.  Georgia law defines it as driving "in reckless disregard for the safety of persons of property."  Many different acts could constitute reckless driving, including excessive speeding, aggressive driving, tailgating, etc.  This is in contrast to DUI, which has a very distinct and obvious definition.

Georgia judges are required by law to sentence you to a minimum of 24 hours in jail after a DUI conviction (and many jurisdictions require much more than the minimum 24 hours).  While many judges will give you credit for the time you served at the time of arrest, this time rarely amounts to a full 24 hours.  Thus, you will likely have to return to jail to serve the remainder of the required time.

A first DUI offense could suspend your driver's license for up one year. With few exceptions, our clients consider this the “kiss of death.”

If you are over 21 years old, a first DUI conviction in five years triggers an automatic one-year suspension of your driver's license, with the possibility of early reinstatement after 120 days (provided you complete a DUI Risk Reduction Program and pay the required reinstatement fee).

During this first 120 days following a DUI conviction, you can apply for a limited driving permit that will allow you to drive to work, school, substance abuse counseling, DUI School, for medical care and treatment purposes, to pharmacies to drop off or pick up prescriptions, court appearances, probation appointments, and community service.

Most automobile insurance companies will cancel your policy if you are convicted of or plead guilty to DUI.  You will have to apply for a special “high risk” insurance policy. On the other hand, a reckless driving conviction will not cancel your policy.  It will, however, likely increase your insurance rate.

In addition to affecting your car insurance, DUIs are also associated with higher fines and fees than a reckless driving offense.  For a first DUI offense, the fines range from: $300-$1,000, while the reckless driving statute provides no mandatory minimum fine.  In addition to the “base fine” — the fine assessed by the court — the state of Georgia adds on mandatory surcharges.  These mandatory surcharges, which are usually calculated as a percentage of your base fine, are much higher for a DUI than for other traffic offenses, including Reckless Driving.  In fact, the mandatory surcharges for a DUI can end up nearly doubling the total amount that you will have to pay following a DUI conviction.

A first lifetime DUI conviction results in a mandatory one-year sentence.  While a portion of this will likely be served in jail (as discussed above, a minimum of 24 hours in jail is required for a first-time offense), the remainder is typically served on probation.  For example, if an individual is sentenced to 3 days to serve in jail, he will serve 11 months and 27 days on probation.  For a DUI, this probationary period is not discretionary and cannot be shortened.

This is in contrast to reckless driving, which carries no mandatory minimum sentence.  As a result, while most judges will assess a probationary period following a reckless driving conviction, it will often be shorter than the one-year required for a DUI.  In addition, many judges will consider allowing the probation to terminate once the individual completes the required special conditions, such as community service and payment of the fine.  Most probation companies charge a supervision fee that ranges from $35 - $55 per month.  Early termination of probation can reduce the number of supervision fee payments that must be made, thereby cutting the overall cost.

Nolo Contendere means “no contest.”  Pleading “nolo” essentially means that you neither wish to contend nor admit to the charges.  For most traffic offenses, including reckless driving, a nolo plea will be reported to the Department of Driver Services, but points will not be assessed on your license.  A nolo plea may be used once every five years for a particular type of offense.

It is important to remember that a nolo plea is discretionary; judges are not required to accept a nolo plea in any case.  Many judges will not even consider a nolo plea to a DUI charge.

Further, the Georgia legislature has decided that pleading nolo to DUI will not prevent the licensing implications of a DUI conviction or guilty plea.  As a result, you will face the same mandatory license suspension, even if the judge accepts your nolo plea.

If you have been charged with a DUI, do not plead guilty to the charges without understanding that it will remain on your criminal record forever.  While no attorney can guarantee a particular outcome, hiring the top-rated Atlanta DUI Lawyers from our office is your first step in determining if a reduction to reckless driving is possible.

Richard Lawson is the top-rated and most reviewed Atlanta DUI Lawyer.  He is a former Georgia DUI Prosecutor with nearly 20 years experience defending people accused of DUI in throughout Atlanta, Metro-Atlanta, and North Georgia.  His reviews can be found on Avvo.

Your case will not defend itself. Call an Atlanta DUI Attorney at our office today! 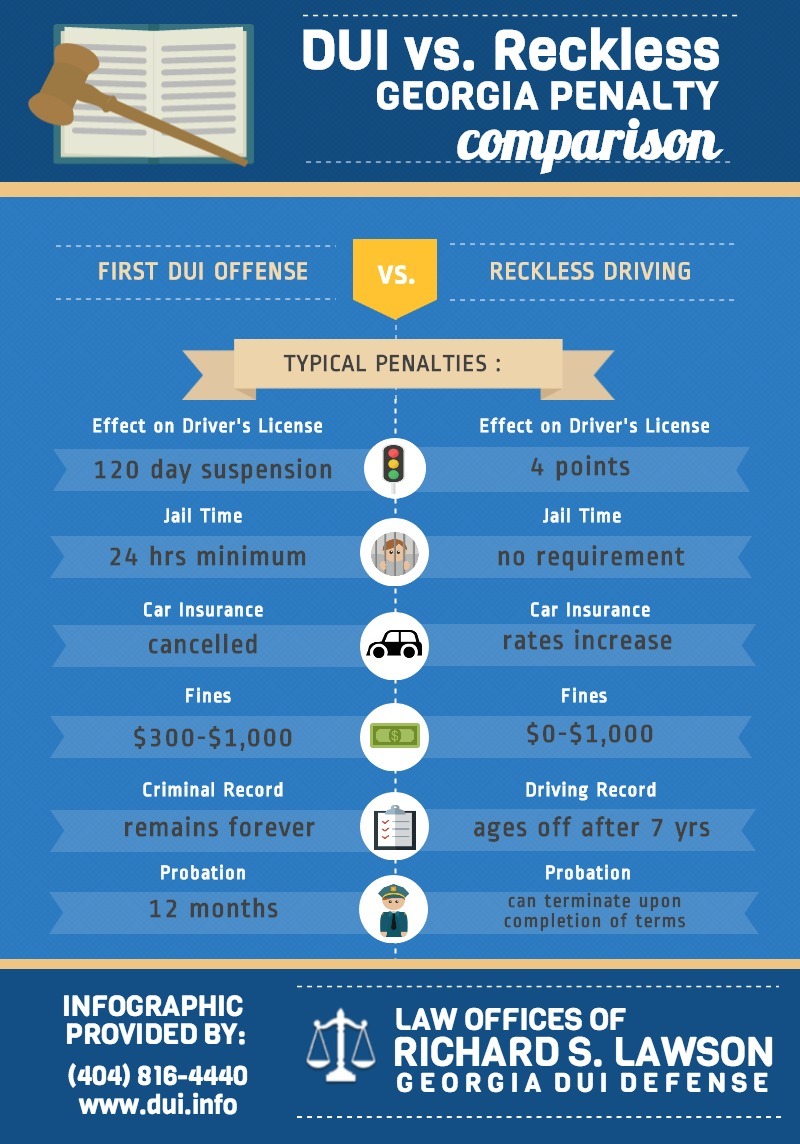 Great graphics, and of course information Richard! Georgia is harsh on first offenders! I would not think twice about calling you, if I were in Georgia!

How does it appear on a background check after being reduced

It would show an arrest for the DUI, and then the disposition line would show reckless driving.